The organizing committee and the primary sponsor, ‘Pelling Insurance’ are pleased to announce that on Labour Day Saturday (September 2, 2017), the seventh annual Crescent Beach Concours was held on the grassy lawn of spectacular Blackie Spit in Crescent Beach, British Columbia. The 2017 event marked the 15th year that organizers have brought together a Labour Day long weekend gathering of Collector Automobiles and Motorcycles. 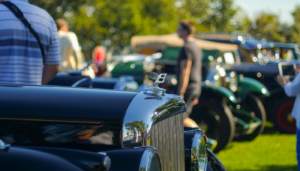 From applications, the committee selected up to 100 outstanding entrants. This year, as in the past, entrants came from all over the west coast of Canada and the United States. Entrants covered a broad span of makes and years and included vehicles that are often rare and seldom seen by the public.

This event was a ‘Concours d’Elegance’ and awards were decided by a world Class team of Concours Judges. The NAACC officially sanctioned this event, benefiting the BC Children’s Hospital Foundation. Philip Du Moulin of Sothebys International Realty Canada is a major sponsor for the Crescent Beach Concours.

Displayed for the first time in Canada – from the Jon Shirley Collection – a stunning 1967 Ferrari 275 GTS/4 NART Spyder (valued at over $25 million U.S.) was on the show field.

FOR MORE INFORMATION ABOUT THIS EVENT OR TO ENQUIRE ABOUT SPONSORSHIP OPPORTUNITIES:
604-263-3400 | crescentbeachconcours.com

After seeing the beautiful Ferrari 275 GTB (Berlinetta) on the stand at the Paris Motor Show, Luigi Chinetti wondered what a convertible version would look like. After talking to Sergio Scaglietti, the body fabricator for the 275 GTB, and some arguing with Enzo Ferrari, Luigi agreed to order 25 total 275 GTS (Spyder) versions. As the US distributor of Ferrari and owner of Ferrari’s North America Racing Team (NART) he was well positioned to sell special­ized cars. With sales slower than he anticipated, only 10 of the convertibles were completed with the first two having handmade alloy bodies, and the other 8 using the steel 275 GTB body panels. The alloy body helped lighten the car for racing and lowered the stress on the frame which had not been stiffened even though the original design counted on a structural roof. The resulting design worked out great as all the cars had exceptional driving characteristics and performance.

The displayed car is chassis number 09751; the second car produced. It sold initially in 1967 to Alfred E. Goldschmidt in Connecticut, then passed through 4 more owners before being acquired by the current owner, Jon Shirley, 23 years ago. Previously, Jon had owned a few sports cars and racing cars, but this was his first concours level car. After personally doing a mild restoration he entered the car into the 1994 Pebble Beach Concours and took 3rd in Class. This started Jon’s enthusiasm for concours events and his collection now holds two Pebble Beach Best of Show winners and numerous award winning cars. This Ferrari went in for full restoration and subsequent Ferrari Certification in 2005. It has won awards at Ferrari Nationals, Kirkland Concours, The Quail, Concorso Italiano, and Cavalli no Classic as well as driven many thousands of miles in tours like the Gautier Classic, Pebble Beach Tour (Kirkland WA, to Monterey CA), Holyrood, UK Concours & Tour, and others.